In the middle of the Caribbean Sea lie the five islands of Bonaire, Curacao, Saba, St. Eustatius and St. Maarten. Together these islands called the Netherlands Antilles.

The 61 km long island with a width of five to fourteen kilometers is the largest island of the Antilles. The island has about 170,000 residents from 40 different countries.

Willemstad is the capital and the only city on the island. The two oldest districts of Punda (the point) and Otrobanda ('other side') are separated by the Anna Bay, but around 1880 connected to a floating pontoon bridge, called the Queen Emma Bridge, popularly called the "Ferry Bridge ".

From the floating bridge is a beautiful view of the Queen Juliana Bridge. This bridge dominates the bay, with its span in the middle of 56 meters above the channel. 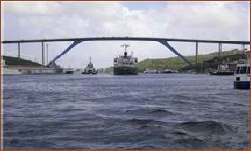 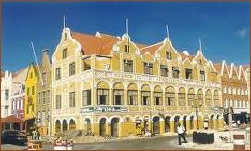 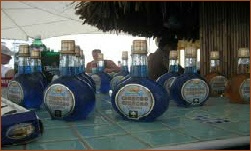